"An online meeting in spring, An autumn gathering in Hangzhou, ACG fair never ends." These days, through television, newspapers, the Internet, mobile phones, Hangzhou outdoor publicity, and other channels, this slogan always comes in pairs with the mascot "Lele" of China International Cartoon & Animation Festival (CICAF). This is Hangzhou, the "City of Animation and Cartoon"sending invitation in a special way. 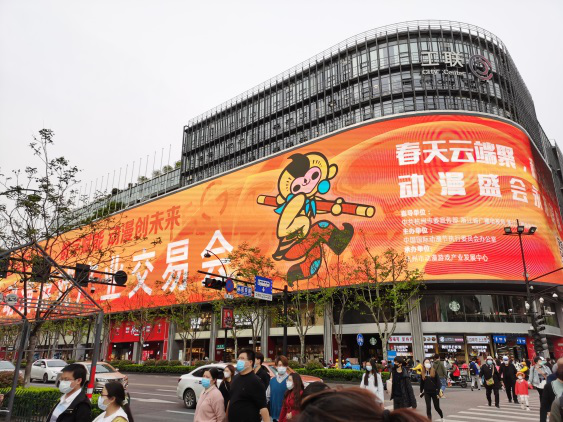 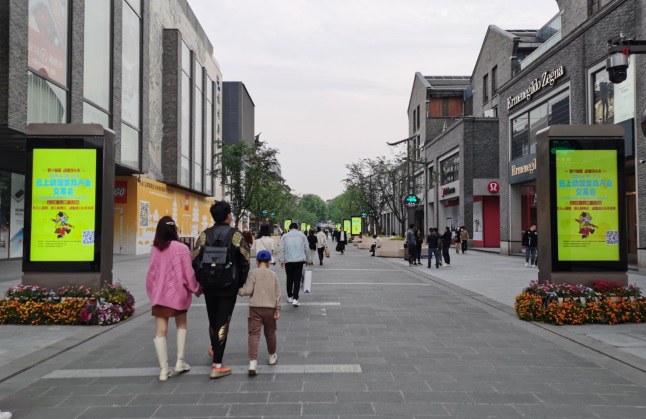 Since the beginning of 2020, the sudden outbreak of COVID-19 has accelerated the pace of all walks of life to embrace digitization. During the extended May Day holiday, Hangzhou's offline cultural and tourism consumption market had caught up. The "Cloud ACG Industry Trade Fair" themed with "Digital-enabled/Digital Empowerment, Animation creates/inspires futures" was staged and wrapped up with fruitful results. The online ACGevent not only added a strong animation vibe to the May Day holiday, the first time during which over a decade that there is an absence of CICAF, but also attracted people's continuous attention to ACG industry, an urban economy and future economy, and aoused their fervent expectation for the 16th CICAF to be held in the golden autumn. 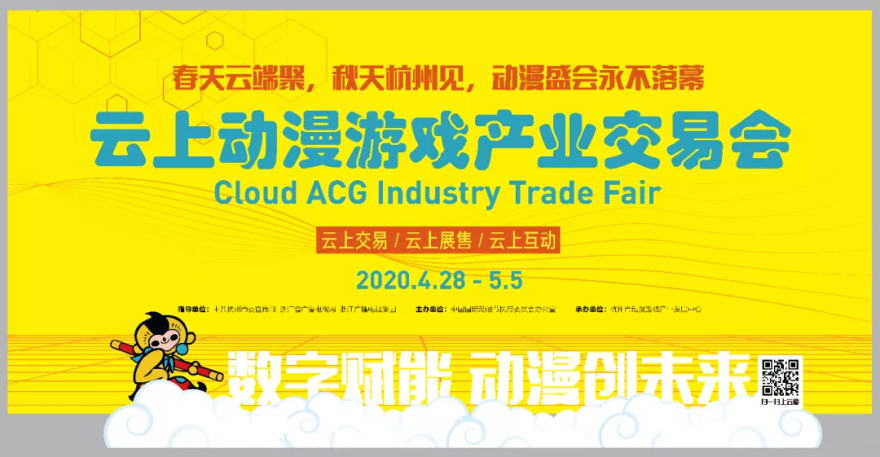 Affected by COVID-19, exhibitions around the world have been greatly impacted. The 16th CICAF will also be postponed to the end of September and the beginning of October, and is still being submitted for approval. Against this background, the Executive Committee Office of CICAF responded to the call of the CPC Central Committee and the State Council to innovate the exhibition service mode, took an exploratory attitude, actively acted and planned to launch China's first online ACG Industry Trade Fair. In less than two months from the decision to hold, the plan formulation, the platform construction to the start of implementation, it not only received the care and support of National Radio and Television Administration of the People’s Republic of China and China Media Group, as well as the careful guidance of Publicity Department of the CPC Hangzhou  Municipal Committee, Zhejiang Radio and Television Bureau and Zhejiang Radio and Television Group, but also received extensive media attention, audience welcome and praise from the industry. It is generally believed that this is the "City of Animation and Cartoon", Hangzhou is a realistic case of scientific epidemic prevention and control and it is taking initiative to plan for the overall development along with the change. Lots of business people at home and abroad who participated in the event said that the holding of this fair was very timely and useful, which not only enabled them to realize cross-border business communication through the Internet, but also enhanced their confidence and sense of anticipation for CICAF. 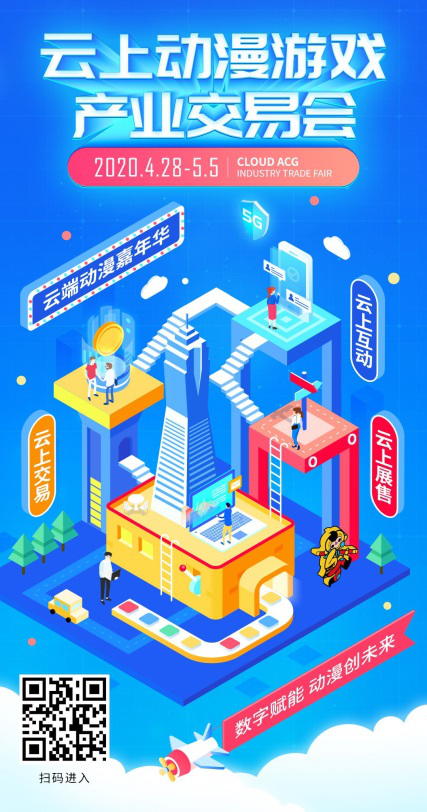 "Cloud Trading" is the top priority of this fair. In order to facilitate domestic and overseas ACG enterprises to conduct transactions easily through the Internet, the organizer, relying on the "cloud trading" system platform, provided online a series of business services such as one-on-one meeting, release of new films, IP authorization, release of outsourced projects, and international special events, attracting 18,107 professional audiences (including 1,380 international business people) from 45 countries and regions such as Britain, France, the United States, Canada, South Korea, Singapore, etc. Fifteen countries and regions have released 181 latest ACG projects. Foreign ACG institutions and enterprises such as British Children's Media Conference (CMC), KOCCA and TV Tokyo have released world-renowned IP projects such as Ultraman and Gintama. 50 domestic and foreign buyer institutions such as iQIYI, Tencent and Youku have settled in the meeting room, conducting 806 one-on-one video business meetings, and 202 enterprises have achieved 3,648 instant communications through online platforms, reaching an intention transaction amount of more than 40 million yuan. In particular, the integration of "cloud gathering" with "offline meeting" has brought 22% of new users to the business sector of the 16th CICAF. 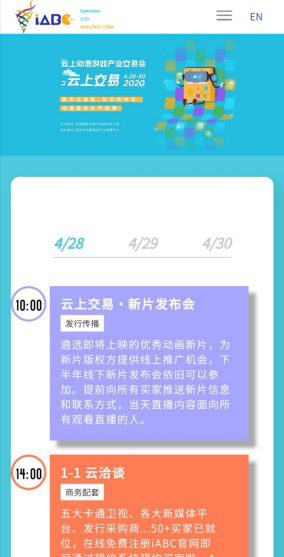 In a bid to fully highlight the concept of "cloud" in this fair, the organizer takes a long-term view- by grasping the trend of "new infrastructure", working closely with specialized agencies, and repeatedly studying and revising to develop and design 16 events covering the three major sectors of "cloud trading," "cloud exhibition and sales," and "cloud interaction" in a short period of time, while being compatible with PC-side and mobile-side network platforms. Since the platform was launched in the early morning of the first day of the opening ceremony of the fair on April 28, it has attracted much attention from all walks of life due to its powerful functions of one-stop trading, exhibition , sales, and interaction. In particular, the block cloud exhibition hall built with 2.5D module technology gathered nearly 100 domestic and overseas high-quality ACG enterprises, including Dargaud Group, The Media Pioneers, CCTV Animation Group and Tencent Animation & Comics (Tencent AC), creating a realistic "cloud comic-con" atmosphere. This year's Cloud ACG Industry Trade Fair provided release opportunities for the projects of Hangzhou-based ACG enterprises, and a number of high-tech projects covering 5G and artificial intelligence (AI), such as Zoland Animation's AI performing animation technology and Versatile's original virtual idol, were displayed, refreshing people's understanding of traditional animation and showing the infinite potential of digital animation. In addition, a number of excellent animation programs were released for the first time through live streaming by ACG providers, including Zhiyin Animation, Wuhan ACG Association and other Hubei-based ACG enterprises, promoting the work and production resumption of ACG enterprises to a certain extent. 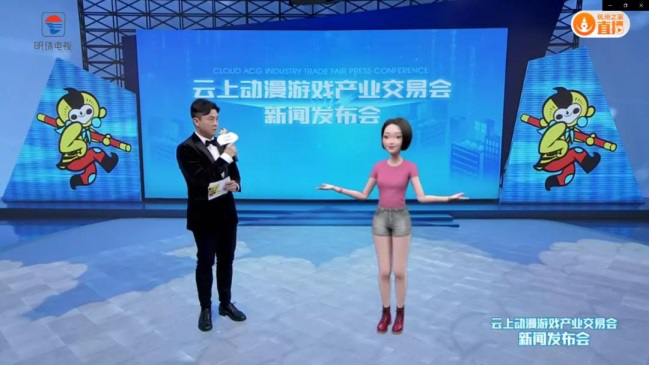 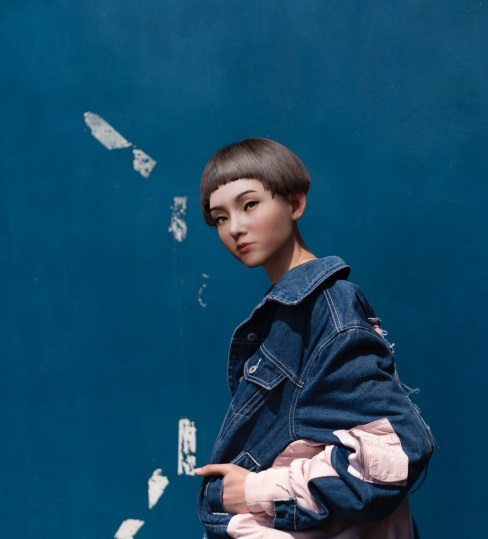 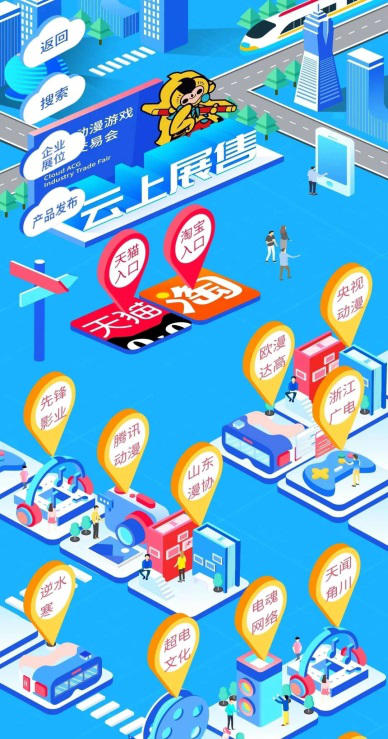 Currently, China's epidemic prevention and control work is showing a favorable trend, but cultural activities such as indoor movie and exhibition viewing are still under lockdown, so cloud shopping and cloud consumption have been many people's first choice. Catering to the new needs and changes of people's spiritual and cultural life during the outbreak, the organizer arranged relevant contents via cloud exhibition & sales and cloud interaction, enabling people to enjoy animation and comics at home. Working with Tmall's Youth Lab and Taobao ACG under Alibaba Group, the trade fair launched the "2020 Tmall ACG Carnival", which gathered thousands of businesses, one hundred thousand goods and many new authorized joint intellectual property products including The Untamed, Netease's Onmyoji, The Legend of Qin and The King's Avatar, and launched the immersive VR "Cloud Animation Park" and cloud ACG theater; Together with virtual idols, the trade fair launched the 5G live streaming interactions, with the number of viewers on Taobao Live reaching a peak of 2.145 million, creating a new ACG cultural consumption mode that combines entertainment, viewing and shopping, promoting holiday cultural consumption and stimulating domestic cultural demand. Working with Wasu Group, the trade fair launched the domestic and foreign outstanding animation and comics exhibition activity, with 30 selected excellent domestic and foreign animation and comics works (including works made in Hangzhou) free to the people. Working with People's Daily Online (Zhejiang), the trade fair launched a VR animation and comics exhibition themed by "fighting against COVID-19 with animation, being a strong backup for love", letting people enjoy immersive cartoon works with the theme of epidemic prevention and control from our teenagers. The series of activities, which are deemed to enrich this year's May Day holiday through animation and comics, are well-received. 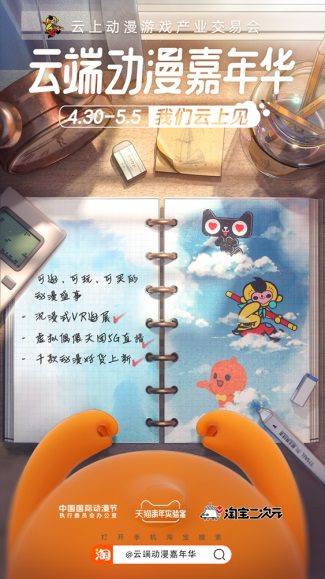 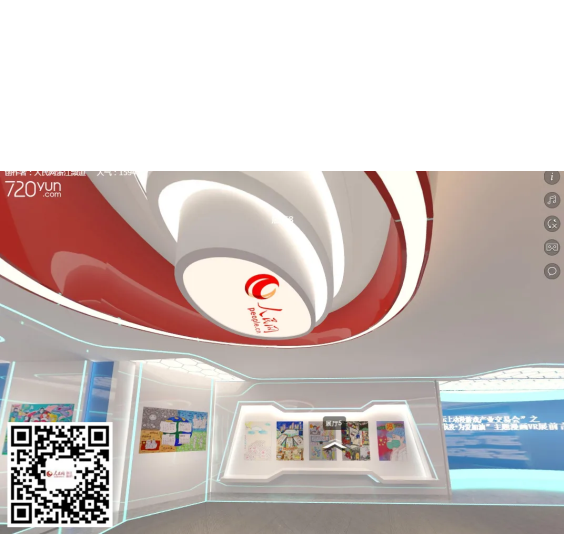 Let's meet at the next CICAF

During this year's trade fair, the organizer followed the trend of live streaming and held 17 live streaming activities, with a total of 16.0192 million views. In particular, the "press conference" live streamed by Xinhua News App, CCTV News APP and other platforms, realized a total of 4.2729 million views in half an hour. A series of brand events, such as the "Golden Monkey King Awards" competition, China Cosplay Megatropolis, voice actor competition and China (Hangzhou) International Children’s Cartoon Contest (ICCC), sent information about works collection or event commencement to people through "cloud live streaming", "cloud connection" and "cloud release", aiming to attract more professionals and ACG fans to participate in the 16th CICAF. The resumed "Golden Monkey King Awards" competition, sponsored by China Media Group (CMG), has officially started to collect works around the world, which has attracted extensive attention from the animation and comics industry and media. The China Cosplay Megatropolis and voice actor competition invited famous Cosers and voice actors to interact with viewers through live streaming, which are highly praised by ACG lovers. The ICCC, with a newly added theme of "targeted poverty alleviation", contacted the art teacher in charge of the competition in Qiandongnan, Guizhou through an on-the-spot video call, presenting local children's desires and expectations for the competition to viewers. In addition, on social platforms such as Douyin and Weibo, online activities including the challenges, Weibo hot topics and H5 interactions keep attracting fans. 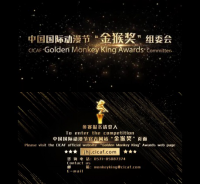 (The collection and promotion of works of "Golden Monkey King Awards") 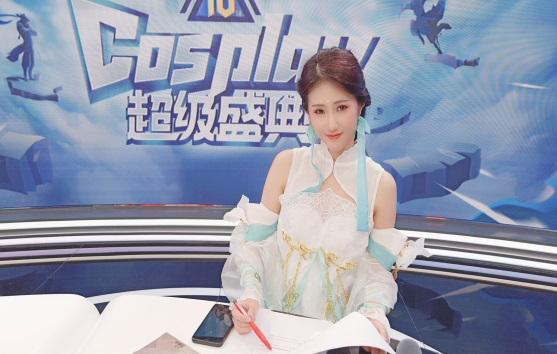 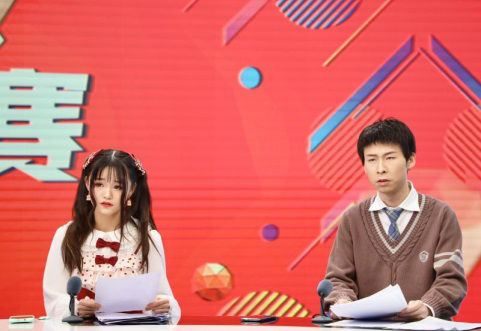 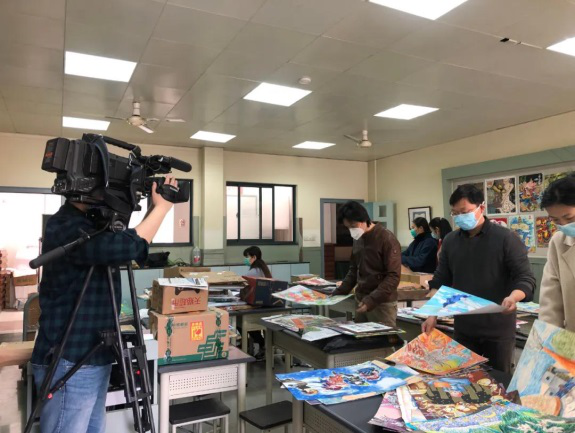 With the closing of this year's Cloud ACG Industry Trade Fair, Hangzhou, the city of animation and comics, has started its preparatory work for the 16th CICAF, aiming to provide the most thoughtful services for next year's participants, hold a pragmatic and fruitful animation event in this special year, and contribute to epidemic prevention and control as well economic and social development with practical actions related to animation and comics industry. 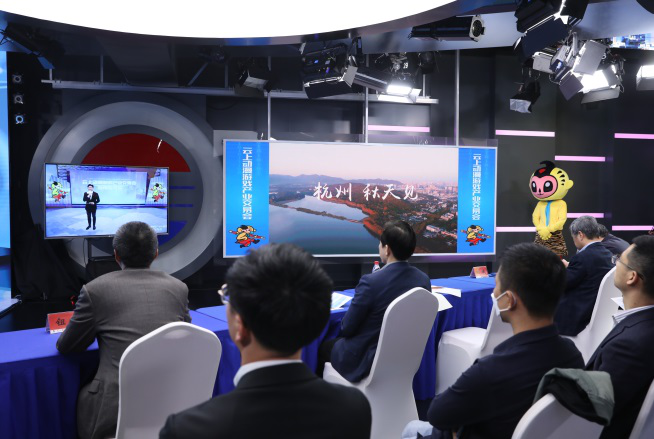 (Invitations from the 16th CICAF sent to Cosers across the globe)