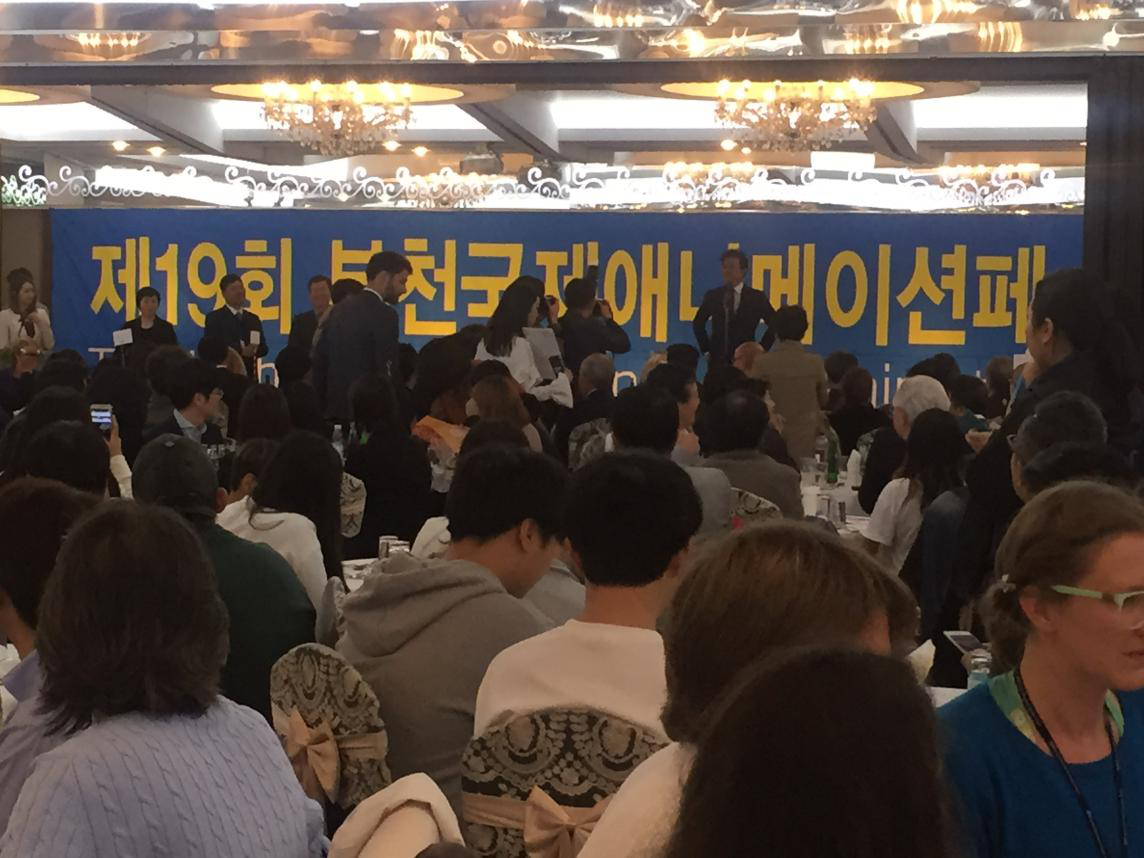 The 19th fuchuan international animation festival in South Korea (BIAF2017) held on October 20 to 24, the cartoon festival theme is Ani + Fun, there are 32 countries 111 cartoons for international competition unit.With "@ bear and her mouse oscar-nominated Benjamin Rene new a opening out the story of the big bad fox, but for some reason, the opening to film.Seven films nominated for best animated feature, including the director of the journal in the corner of this world deep must be straight and the director of revenge again bill plame's in animation festival screening during the Q&A session.Cartoon festival for the fans the opportunity to face to face with masters of animation, such as "king cosmic forces" director, design of mountain He Bo "evangelion" role of zhen original meaning line, director of Disney "veteran" & producer retrofitted Mattinso, Eric Goldberg open lecture master.Members of the sentiment struck A pink PiaoChu which serve as the cartoon festival promotion ambassador.It has applied for certification, Oscar in November if awarded the certification, this year's best shorts will qualify alternative academy award nominations.

Site has five BIAF activity, is small and scattered, organising committee provides maps but the road signs are rare.Animation festival in collaboration with CGV theatre set up a three-day event;In addition has exhibit in Bucheon animation museum, seven local animation company and several colleges and universities set up a booth;While BBS lecture set beside the big classroom of the museum and training in the building.Attend BIAF most was shortlisted for the cartoon festival film director, the organisers invited the judges and the special guest speakers, participate in the local people are mostly students in colleges.Overall, BIAF is "academic" animation festival, after all, is the earliest school shorts competition.But the cartoon festival closely associated with Oscar, Annecy animation festival, this time, there are two special screening link shown the works of the shortlist for the two film festival of the previous year.

This year's biggest bright spot should be the Disney, in addition to invite two working in Disney for elders to share the creative experience of more than 60 years, is also equipped with Disney concert, the audience while enjoy the symphony watch Disney classic characters of manuscripts.

The film screenedWatched The animated feature animation festival during The loggerhead sea turtles The Red Turtle ", "London family Ethel&Ernest" and admitted to The film a screening unit.To adults, now a lot of animation do direct realistic problems, explore the human nature, rather than domestic is given priority to with family.Art gimmick, form varied, oil painting, ink painting wind wind, pencils, 3d modelling...Animated often combined with a variety of drawing techniques, plus post-processing, mixing, often give a person the feeling that find everything new and fresh, the students' creativity and imagination is boundless.It is worth mentioning that organising committee to give each movie maker a score card, to understand the audience feedback; Some screening unit also set up a Q&A session, to provide the opportunity to communicate between the director and the audience.