Every April and October, in southern France, the MIPCOM is held, as charming as the blue coast. This is the world's most influential film and television content exhibition.

Since 2009, Hangzhou animation companies have participated in the exhibition for 10 years as a delegation.

From October 15 to 18, 2018, the 2018 MIPCOM was held in France as scheduled. China, as the country of honor, promoted the contents of the country's quality films and television programs to the world, and introduced the latest development achievements of its film and television industry around the theme of "wonderful stories from China". The Information Office of the State Council and the National Radio and Television Administration co-organized a series of promotional activities, including five major events, four special events and two events by the organizing committee. This year, more than 50 Chinese organizations, including China International Cartoon & Animation Festival (CICAF), Zoland Animation, Sparkly Key, with about 500 exhibitors, participated in the festival. It attracted over 10,000 audiences from 100 countries and regions.

The participating animation companies from Hangzhou included Zoland Animation, Sparkly Key, Versatile Media, Steam Works, Tthunder Animation, Ynuo Culture, MegaMedia, Wawayu Animation, and Fish Studio. In the international first brand exhibition of the film and television content industry, they acquired the freshest information, looked into the most sensitive orientation, approached the most selective customers, and constantly improved their products and services, to gradually establish a foothold in Cannes, and gain more dollars and confidence.

In the 10 years in Cannes, experience and toughen ourselves in the most competitive frontier of the market.

Why Go to Cannes: Hangzhou Animation Answers with Ten-Year Results

In October 2010, Hangzhou animation companies took up more than one third of the Chinese booths in the MIPCOM.

In October 2017, CICAF organizing committee joined hands with Hangzhou animation companies to organize a mission group to attend the MIPCOM, becoming the “most loyal” exhibitors in the Chinese booths, and the largest local mission group from China.

In October 2018, Hangzhou animation companies were showcased in Cannes for the 10th year. Themed with “wonderful stories from China”, they promoted Hangzhou quality film and television program contents to the world, and introduced the latest development results of the Hangzhou film and television industry.

Why do we go to Cannes, the most competitive exhibition? -- Hangzhou animation companies give an answer with ten years.

During the 10 years, CICAF, through this platform, has let the world's first-class film and television animation companies understand China, know about Hangzhou. It has invited them to attend exhibitions, and display transaction results.

During the 10 years, Zoland Animation has established a business team to explore the overseas market. Versatile Media has joined hands with international first-class animation film production team. Magic Mall was nominated for the International Emmy Award with Luo Bao Bei. MegaMedia has built a 24-hour overseas trading platform. And more enterprises have gone global with quality products and excellent works.

In this most picky platform, "going global" is first and foremost to "sell out products". The export of cultural products is above all to sell outstanding domestic works via the economic and trade platforms. And then it is to export our culture and values.

Voice of Enterprises: 2018, Our Harvest in Cannes

Zoland Animation received widespread attention with its original works and animated films issued as an agent, such as Strange Wood Spirit, Our Friend Xiong Xiaomi, and Happy Superman Series. Gobind Singh, Minister of Media and Culture of Malaysia, visited Zoland Animation booth, and expressed appreciation for the excellent production and rich Chinese characteristics of the works.

Tthunder Animation reached a cooperation intention with Japan YTV, which produced and released such famous animations as Detective Conan, and Ninja. Next, it will send more quality domestic animation works to abroad, including Rainbow Chicks, Qiqi Cruiser, Mighty Little Tiger.

Versatile Media has produced and released two Kunta series of animated movies and TV episodes to abroad. Axel: Adventures of the Spacekids is scheduled to be screened in North American cinemas next month. Though the Kingdom of Garbage, a 3D animated film co-produced by Versatile Media and American and Mexican partners, has not yet been completed, it has received intentions from overseas distributors, praising this animated film for its international settings and context.

Steam Works has completed Arabic dubbing and English subtitles for 26 episodes of Pocket Forest, a freeze-frame animation planned and produced for three years. It obtained high attention of channel customers in advance reservation. During the MIPCOM, there were nearly 50 effective minutes related to Pocket Forest. In addition to cooperation on copyright content, the company communicated with freeze-frame animation studios from Poland, Italy, South Korea and Japan on freeze-frame technology project cooperation.

Ynuo Culture made a debut in Cannes with the animated film Oolong Courtyard: Legend of Buffoon. It instantly attracted attention of clients from Asia, Europe, North America, South America, and Oceania, which included direct buyers, such as TV stations and video platforms, as well as international agents, animation distribution companies, and foreign cinemas. Oolong Courtyard: Legend of Buffoon, featuring rich Chinese characteristics, was selected by the organizing committee to recommend to the world. During the MIPCOM, Ynuo Culture received partners from a dozen of Asian countries and regions to work together to open up the Asian market.

Fish Studio Highly won high admiration from all parties with Dinosaur School, Dragon Palace Treasure, and Three Bears. Many distribution companies and agency companies came to the booth for copyright negotiation, and many production companies expressed hope for co-production. To date, Fish Studio has reached a preliminary intention of cooperation with British famous animation company Aardman, to co-produce the animated film.

MegaMedia continued to act as a bridge, integrating quality Chinese and Zhejiang film and television works to participate in MIPCOM. It attracted more than 100 professional audiences for negotiation from 26 countries, including the United States, France, Canada, India, Malaysia and Vietnam. More than 10 organizations expressed willingness to join the iABC next year, and hoped to build partnerships through follow-up contacts. Another five overseas companies were interested in joining MIPCHINA next year. 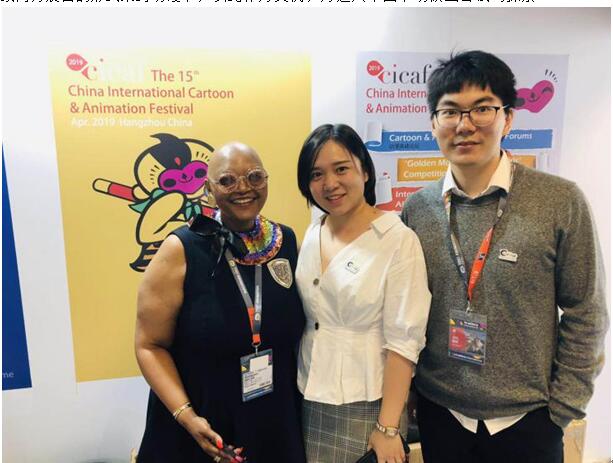 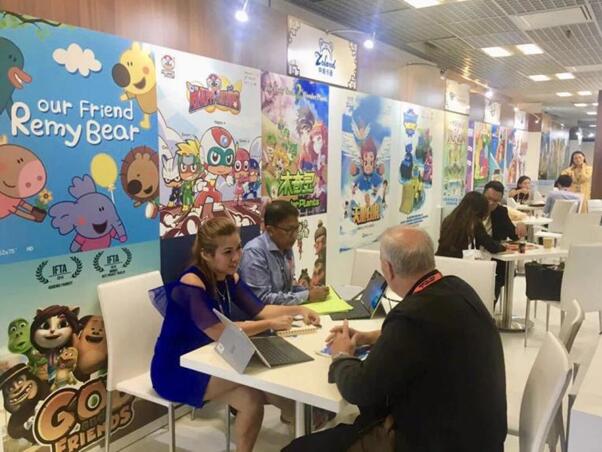 Go Out and Bring In: Hangzhou to Grow Up Like Cannes

At the recently concluded MIPCOM, the mission groups from Columbia and Bulgaria paid visits to the CICAF booth. They showed great enthusiasm for the 15th CICAF in 2019, hoping to participate in it and launch a series of activities at the festival next year. In addition, 104 enterprises from 32 countries, including the United States, Britain, France, Canada, Malaysia, South Africa and Kazakhstan, consulted in detail the CICAF activities. Fifteen companies said they wanted to join the festival in the form of exhibitors or business booths and, taking this opportunity, to try and explore to enter the Chinese market.

For 10 years, Hangzhou animation companies have kept going out, while not forgetting to bring in first-class international exhibitions.

In 2017, because of Hangzhou's positive communication and profound cultural background, MIPCOM came to Hangzhou to host a special MIPCHINA event in China. It brought the world's top film and television companies to Hangzhou, allowing Hangzhou animation game companies to participate in international cooperation without leaving their homes. It was MIPCOM's second special event outside France, and its first entry into the Chinese market.

This year, the 2018 MIPCHINA attracted 39 international enterprises from 18 countries and regions, including the United states, Britain, Japan, Germany, Russia and India, and 52 domestic animation enterprises for 796 one-to-one precision negotiations. They reached 150 cooperation intentions on the spot, worth over $12 million. A total of 506 Chinese and foreign representatives from 145 film and television production organizations attended the forum, up 9 percent over the previous year. The number of negotiations increased by 50 percent, and participants rose by 12 percent.

Ms. Laurin, general manager of the entertainment section of REED MIDEM, France, the sponsor of MIPCOM, said that “Hangzhou and Cannes have many similarities. They have beautiful scenery and unique urban culture. Both cities are exquisite, elegant and charming."

To effectively transform the natural resources endowed by God into cultural competitiveness, Hangzhou needs to grow up like Cannes. It will not only be a famous "Heaven on Earth" in China, but also become an international renowned cultural convention and exhibition resort.