From April 30 to May 1, the 15th CICAF Cartoon & Animation Industry Summit Forums are about to make their splendid appearances.

Top masters at home and abroad with their masterpieces, Spider-Man: Into the Spider-Verse, NARUTO, Mulan, and White Snake, will gather in Hangzhou.

With the theme of “Inheritance and Development of Animation in the New Era”, the forums consist of the main forum, master sessions and young sessions. Here, let’s take a look at the guests of master session. 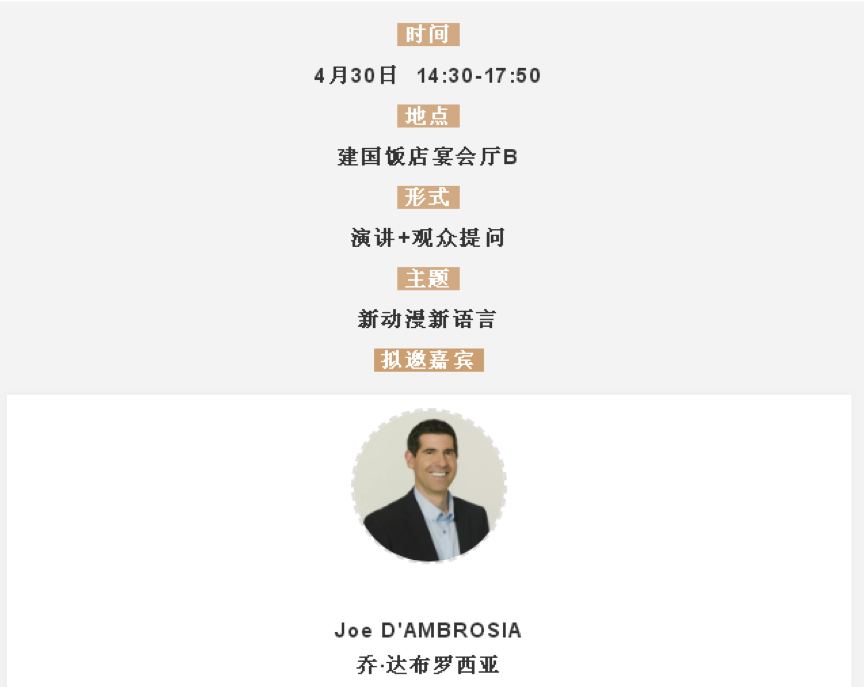 D’Ambrosia joined Disney in 2011 and had played a crucial role in steering the Disney Junior channel to be the #1 preschooler network for six years in a row (2013-2018). He has made overseen productions and creative development including the Peabody Award-winning Doc McStuffins, the Emmy® Award-winning Sofia the First, Muppet Babies, Fancy Nancy, Vampirina, Mickey and the Roadster Racers and Elna of Avalor. He led the first show tour Disney Junior Dance Party On Tour, nominated for a Pollstar Award honoring top achievers in live entertainment. 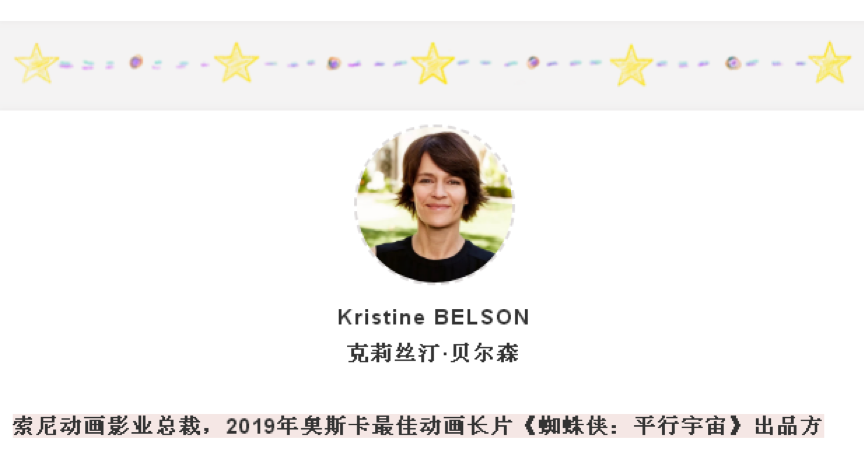 Sony Pictures Animation's past releases include the mouth-watering "Cloudy with a Chance of Meatballs" and monster comedy "Hotel Transylvania" film series. The studio's upcoming release slate includes the action comedy "The Mitchells vs. The Machines" produced by Phil Lord and Chris Miller, and "Vivo," Sony Pictures Animation’s first-ever animated musical, featuring all new songs from Lin-Manuel Miranda, the creative force behind the Broadway smash "Hamilton." 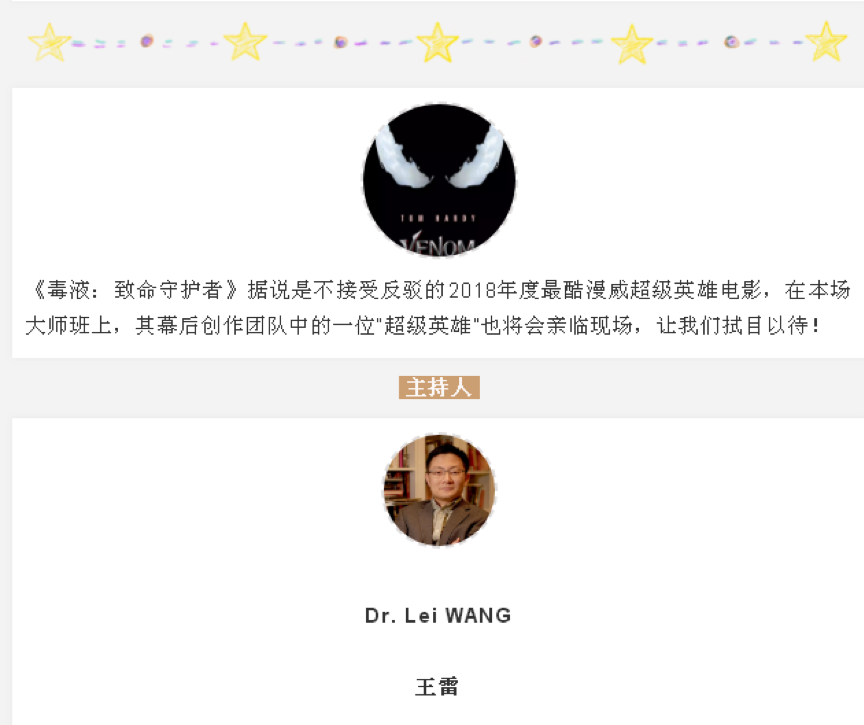 Dr. Lei WANG has been a well-known animation educator and creator in China. After a decade of leading the top animation school in China, Communication University of China (CUC), as the Deputy Dean of School of Animation and Digital Arts, CUC, he founded the Escape Velocity Animation Studio (Beijing) with his colleagues in 2016. He created, directed and produced a number of animated series including Wool Wool Town, Kim and Jim’s Wormhole, The Mirage House in the Clouds, Tacit Blue, Nihao Planets, etc. 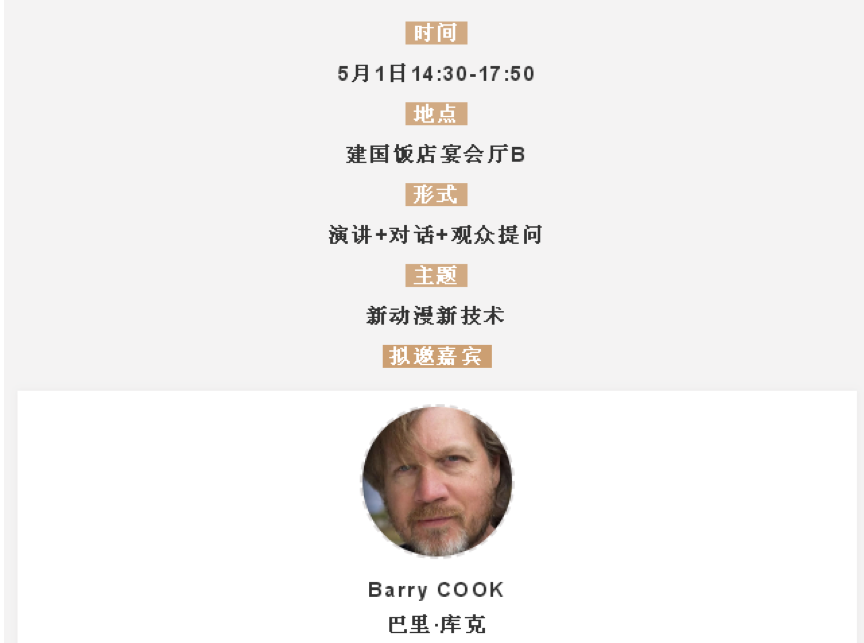 Barry COOK was born on August 12, 1958. He joined Walt Disney Animation Studio since 1981 and started his 17-year animation career there. In 1989, he worked as the effects animator for The Little Mermaid. During the following years, he served as the Visual Effects Supervisor for the Disney classics Beauty and the Beast (1991) and Aladdin (1992). Later in 1998, he co-directed another Disney classic Mulan with Tony Bancroft and it earned him the Outstanding Individual Achievement for Directing of The Annie Awards. Back then, Mulan hugely hit the global market with over USD 300 million gross in total. In 2011, Barry’s directing work Arthur Christmas was nominated again for the Best Animated Feature of The Annie Awards and The Golden Globes. The movie was so prevalent among audiences that it received 22 nominations at the film festivals worldwide. His recent work includes Kong, a co-production project between China and Korea, and it’s currently being developed and produced by Robin Li’s Aquamen Entertainment. 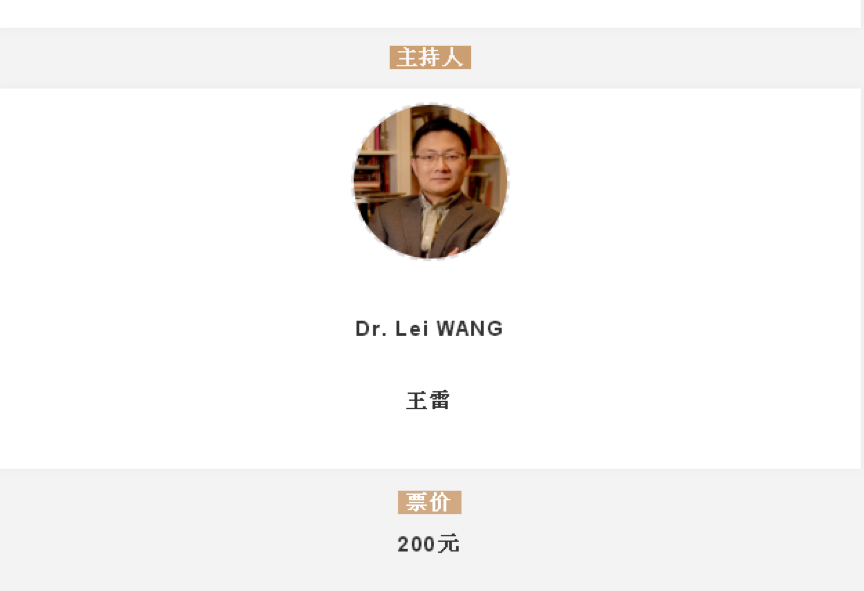 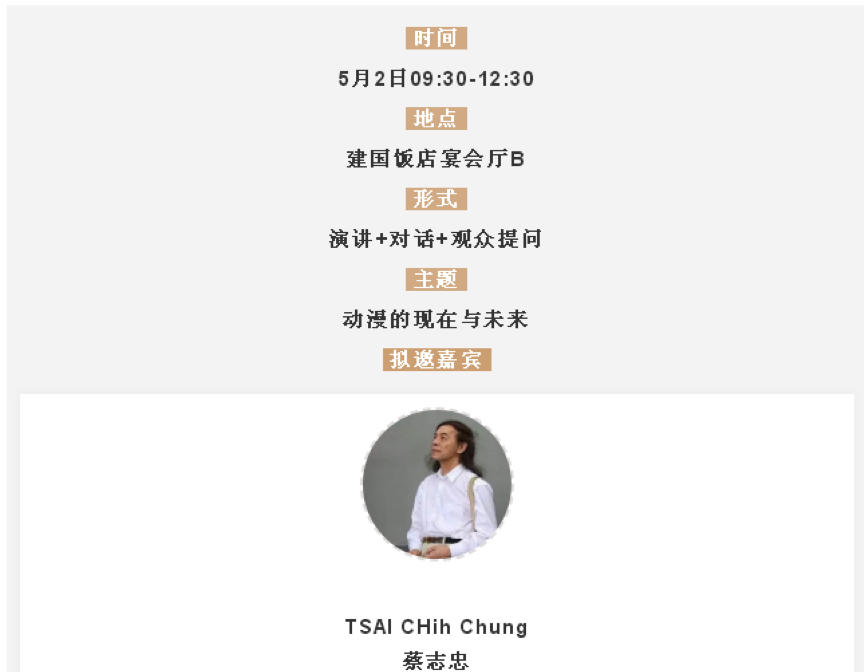 Born in Changhua County in 1948, TSAI CHih Chung set his mind to paint for all his life when he was four and a half years old. From then on, he worked hard without distractions in the hope of being a cartoonist. When he was 15, he mailed his works to Shueisha Inc. of Taipei and he was enrolled. He went to Taipei with NT$ 250 and became a professional cartoonist. Since then, he has been painting for more than 40 years. During the period, he, with a number of Chinese classics and comics, conquered the book market. A total of 40 million copies have been sold to 49 countries in the world, influencing hundreds of millions of people. In 2010, he published the East Cosmology Physics, which condensed 10 years of his painstaking efforts. He extended the power of painting to physics and mathematics, reinterpreted the theory of physics with oriental ideology, and was shortlisted for the 35th Golden Tripod Awards for this book. He is good at creating characters with simple and Zen lines to elaborate his unique views on Chinese classics, philosophical thinking and Buddhism, and leading readers to experience the powerful classical world through humor. 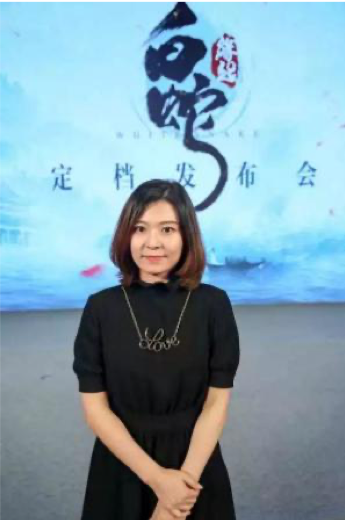 Ms. CUI has 8 years of experience in film development and production, especially in animation and live-action feature films. She graduated from the Communication University of China with a bachelor degree and obtained a master’s degree from New York Film Academy. Ms. CUI has worked in production management team for 21 Jump Street, Little Door Gods, Tea Pets and Cats and Peachtopia. Before joining the Light Chaser Animation, she worked in Sony Pictures Entertainment as production coordinator and Taihe Entertainment as manager of film development.

French Cartoonist, Creator of “Totem Coluche”, France’s Knight of the Order of Arts and Letters

He is also the Creator of 140 sculptures of Noah’s Ark climate (for COP 21), Official Cartoonist of Cannes International Film Festival, Member of the international network Cartooning for Peace created by Plantu and Kofi Annan Nobel Peace Prize. Kristian etches life with humor. Since 1980s, he has created cartoons, current affairs comics for the written press at home and abroad, television as well as the International Cannes Film Festival, the Soccer World Cup, all kinds of posters, publicities, stage settings, and floats for the Nice Carnival. He also participated in numerous exhibitions in France and other nations and won various international awards.

YU joined Comicfans Culture in 2008, and has been granted the honors such as Guangzhou “High-End Talent of Industry”, and “Top-Notch Professional and Technical Talent”, etc. The works published by the company has been awarded Government Award for Chinese Culture and Art. The company launched “CACC Golden Dragon Award” and successfully hosted the China International Comics Festival for 11 editions.

SHEN Hao is graduated from Foreign Language Institute of Hangzhou University (now Zhejiang University), and has obtained Master Degree in Kyushu University in Japan. FanFan Comic was founded by him in 2009, and it is the copyright agency of Shueisha Inc. in Mainland China, with many excellent imported works, Naruto, One Piece, etc. Fanfan’s two original projects, Supernova Award and Chinese Cartoonist Base, are aimed to discover the talents and for further cultivation. Company’s representative works: Top News King and Mode Ⅱ by YOU.LING, Ultramarine Magmell by Dinianmiao, The Hidden Descendants by Misha, Yangyao-The Spirit Cather by Xiaoshili, The Only Human in School by Chaiquanjun, Alarm! Flipped by Kongzao, Magical Drink by If, Idiot Prince by Chang’anmuye, etc.

ZHAN Shiwei has been focusing on the internet venture capital investment report and innovative business models analysis for many years. He is the author of Share Creative Website and has participated in the preparation of the Annual Report on Digital Publishing Industry in China. He once joined Netease as the APP product designer and was responsible for the APP multiple functions planning for hundreds of millions of users. ZHAN founded AniSpark in 2015 and has been focusing on the animation industry for four years.